Should I Test God? 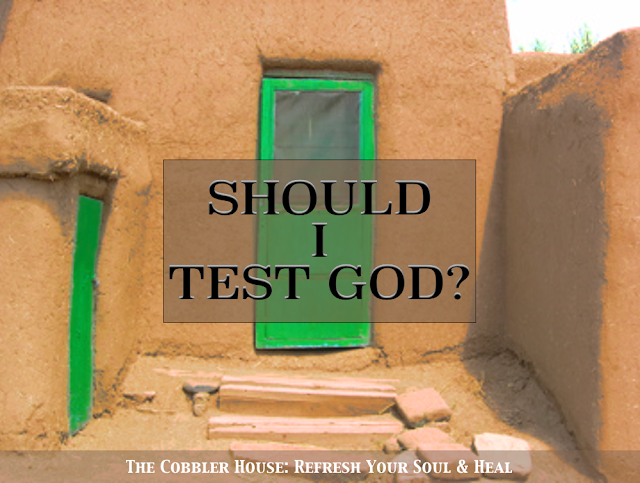 Do you ever feel the need to test the Lord or wonder if He can accomplish a certain feat you've placed out for Him?

There is a story in the Bible that tells about a man named Gideon who felt the need to test the Lord. (It's found in the book of Judges chapter six.)
An Angel of the Lord appeared to Gideon and told him that the Lord was with him.

(Funny thing is that when the angel appeared to him, he didn't call Gideon by name, he called him "mighty man of valor". As I read on, Gideon's questions to the Lord seemed to depict a weak man and by no means a mighty man of valor.)
God chose this man to be the one to save Israel from the hand of the Midianites who were oppressing them.
As the story goes, Gideon basically asked the Lord to prove Himself to him by accomplishing a few things that he had laid out for the Lord to do before he would be obedient to His calling. (Gideon wanted to make sure it was truly God calling on Him to this task.)
So the Lord proved Himself to Gideon, something He didn't have to do, and at the end Gideon approved and followed what the Lord had him to do. For a full understanding of this, read Judges chapter six.
Gideon had some serious doubt issues about what the Lord could do. Do you ever feel that way? That's ok if you do. The Lord knows your heart, and He will take care of those doubts in a loving way that will bring you closer to Him even if He has to physically show you just like He did Gideon.
What should you do when you are in doubt?
First thing to do is to call on the Lord with a sincere heart, and ask Him to help you re-call His promises. (These promises are ones you've read in His Word.)
Second is to apply these promises into your daily walk. I.e. believe that God is going to truly fulfill these promises into your life and at that moment of special need.
Third and final, don't compromise with His promises by adding your own take on them. This produces doubt because the flesh wants to do it its own way and not God's way. Simply stop everything and give yourself to Him then He will guide you in the way you should go.
I've added some of the Lord's promises to us, below. Make sure to read them in context i.e. open your Bible and read what's before and after each promise to obtain full understanding.
May the Lord bless you with strength to follow Him this day.
-Ruben
Isaiah 40:31

"And we know that all things work together for good to those who love God, to those nwho are the called according to His purpose."
-Romans 8:28

"And my God shall supply all your need according to His riches in glory by Christ Jesus."
-Philippians 4:19

"And He said to me, “My grace is sufficient for you, for My strength is made perfect in weakness.” Therefore most gladly I will rather boast in my infirmities, that the power of Christ may rest upon me."
-2 Corinthians 12:9