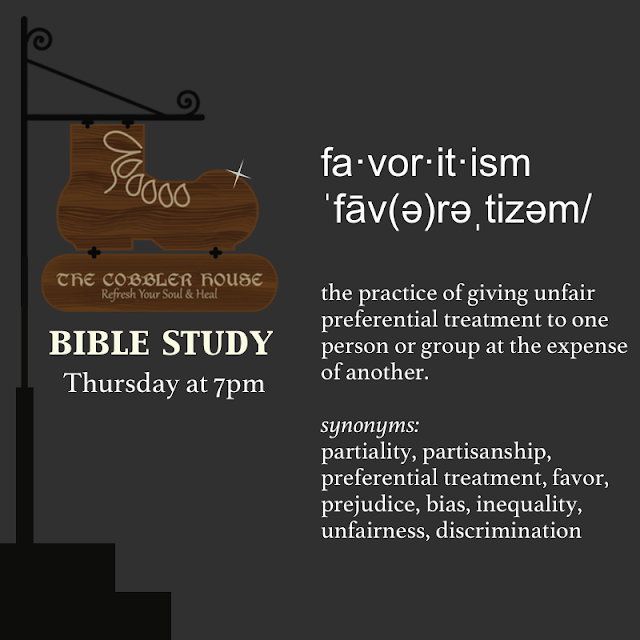 Have you ever favored one person over another based on their outward appearance? For example, let's say there are two people and one appears filthy and the other appears nicely dressed.

How about favoring someone based on their race or their status amongst the people? You might say 'That guy's more popular with the people so I'll talk to him.' Have you ever done that?

The aforementioned examples are few of many ways that one can express favoritism towards a person. The point is that we've probably all done it at one time or another.

The Bible says that favoritism is a total NO GO and not only that, it is a sin and it's evil.

"For if there should come into your assembly a man with gold rings, in fine apparel, and there should also come in a poor man in filthy clothes, and you pay attention to the one wearing the fine clothes and say to him, “You sit here in a good place,” and say to the poor man, “You stand there,” or, “Sit here at my footstool,” have you not shown partiality among yourselves, and become judges with evil thoughts?"  (NKJV)

As Christians, we should be kind and fair to everyone regardless of status, appearance, nationality, race and you name it.

You may ask, why?

Well, not only did we read why in the verse above, but it also says in Proverbs 24:23 that to show partiality in judging is not good.1

It says in 1 Peter 1:17 that He judges without partiality (favoritism).2

Favoritism has always been a bad thing. The Old Testament provides insight on favoritism. Leviticus 19:15 says the following:

"You shall do no injustice in judgment. You shall not be partial to the poor, nor honor the person of the mighty. In righteousness you shall judge your neighbor."

Our Heavenly Father's righteous unbiased judgement is a great example for us to follow.

Let's take His Word and apply it.

We will be reading and discussing James 2:1-13 which speaks of favoritism and other topics at Bible study this evening.

I encourage you to come by and be part of the Bible study so that you can get into the Word of God with other believers. Of course, don't forget to bring a friend - saved or unsaved. Everyone is welcomed.

If you are unable to attend due to distance or whatever the case, I encourage you to look for a good Bible teaching fellowship near you and get plugged in.

God bless you and Stay Strong in the Lord!

1 "These also are sayings of the wise: To show partiality in judging is not good"
-Proverbs 24:23 (NIV)

2 "And if you call on the Father, who without partiality judges according to each one’s work, conduct yourselves throughout the time of your stay here in fear"
-1 peter 1:16-17 (NKJV)